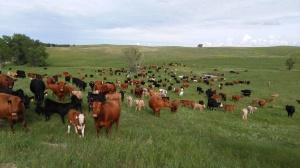 Gus and I were down tearing out some old fence by Tates yesterday when Tate came and asked if I would take him to town to do some things and get his pickup that was in the repair shop… so I did.. while in the Hills, I went down and watched a supper show my friend Paul Larson puts on with another feller I know.. they take people on wagon rides then give them a nice show and a good steak supper.. I enjoyed it. Then this morning, Tate dropped Lige and Gabe off to help me move some cows, but there was a threat of rain and lightning.. seeing how I don’t enjoy riding while it is lightning out, we worked on the fence.. they were good help, as was Gus.. we got the posts all set and a couple wires strung and clipped but ran out of clips.. we came back to the house and called Hope and they had run to town to get a sheetrock lift so they could get their addition rocked.. her brother was out so they wanted to make the most of it… they picked up the clips for us, we ate and had a nap then i worked on leather stuff until evening and then we went and moved the cows.. it drizzled a bit but never did really rain or lightning.. never trust a lying weather forecaster!